(see A Hidden Ulster pp. 220-3 for detailed references and information)

This song also belongs to a genre of literary love songs which do not manifest a depth and sincerity of passion but are elegantly and stylishly constructed and written in praise of patrons.  It is composed for harp accompaniment and is very different to songs of the people found in the region. There is a carefully crafted assonantal rhyming pattern in the lyrics which heighten the musicality of the piece.

It was composed by the celebrated poet, Séamus Dall McCuarta c.1645- 1733 (pp.337- 343) who was born in Omeath, County Louth, who wrote songs and verses in praise of patrons from County Down to Slane in County Meath. He wrote a number of songs in praise of members of the Hall family who still live there in Narrow-water Castle, County Down. They include one in praise of Sinéad Hall entitled, Moladh Shinéad Hall which survived in the Rann na Feirste, County Donegal tradition as Jinny Dheas, a Dhéidh Bhean, and also this song for her mother Ellie Carroll, known as Ailí Gheal Chiúin Ní Chearúil.

There were no songs written by the Omeath poet, Séamus Dall Mac Cuarta, surviving in the oral tradition in Oriel for over a century. This might well be due to the decline in harp music and accompanied song.

The words had survived in the County Meath scribe, Peter Galligan’s Mss. in Edinburgh and the music was collected from a County Down harper, James Duncan, by Edward Bunting (AHU pp.372-3) and published in his 1809 edition of The Ancient Music of Ireland.  It was later published – to the incorrect lyrics – by Dónal O’Sullivan in The Journal of the Irish Folk Song Society 1967.

The air was resurrected in recent times from the Bunting collection and played as an instrumental piece and popularised by pianist, Mícheál Ó Suilleabháin

Mac Cuarta’s lyrics, published in Breandan Ó Buachalla, Nua Dhuanaire 2, 1976, were reconnected to the harp air by singer, Pádraigín Ní Uallacháin, from the version published by Edward Bunting in his 1809 collection, which best matched the metre and the the lyrics or the original song.

Ní Uallacháin sings it on the above video accompanied on the early Irish wire strung harp by County Armagh musician, Sylvia Crawford. It is now in the repertoire of other singers and regarded as a fine example of an 18th century courtly harp song.

It was first recorded by Ní Uallacháin on Gael Linn CD An Dealg Óir 2003, accompanied by harpist Helen Davies. It is also recorded on Ceoltaí Oirialla – Songs of Oriel CD 2017

There’s an unblemished lily known to me in Louth,
I’ll conceal not her name for certain,
The pure, ﬁne beauty ﬁrst granted to Helen
She has recently acquired in plenty;
Not wounding or bruising or ever enticing
But innocent, playful and childlike,
And a royal ﬂood of Munster blood
Flowing through fair gentle Ally Carroll.

Did you not see the beauty of Angelica and Deirdre
Assembled in this modest young maiden,
Each gem of her hair like the shining of stars,
Or ﬂocks of birds in the summer?
The women of Ireland who share in her beauty
Agree that she far outshines them;
If only she’d leased the townlands of Ely,
Ally of the line of Carroll.

You who brings word to the land of O’Carroll
Tell your story with truth:
That a maiden of theirs of the kindest demeanour,
Ever seen on the face of the earth;
For spirit and sense none can her compare
To Carrick bridge from Clogher,
No fault on earth but she wounded to death
Those heroes of powerful vigour.

My blessings ﬁrst give her and tell this young woman
That I never forget her enchantment,
But watch out for yourself on seeing her beauty
That you will not die as Carroll did;
When ﬁrst he heard she had gone to her grave,
The noble fair daughter of Alba.
I doubt that her manner outshined the pearl,
Called gentle fair Ally Carroll

The poet- harper, Pádraig Mac Giolla Fhiondáin c.1666-1733, (AHU pp. 343-6) was reputedly the composer of the airs of his friend Séamus Dall Mac Cuarta’s courtly songs. They both died in 1773. Many of his poems were written in the old Bardic metres but some- especially those written in praise of patrons – were composed specially for harp accompaniment and in new song metres.

Ailí Gheal Chiúin Ní Chearbhaill  is a good example, and was written in praise of Ally/Ellie O’Carroll mother of Patrick and Jenny Hall of the Hall family of Warrenpoint. This is what Arthur O’Neill would probably have referred to as ‘new music’ as distinct from older harp compositions.

The air was collected within living memory of their death, by Edward Bunting (AHU pp. 373-3) at the end of the 18th century from a County Down harper, James Duncan across a short stretch of water from where Séamus Dall Mac Cuarta livid in Omeath.  It was published in his Ancient Music of Ireland 1809. It was later published by Dónal O’Sullivan (below), to incorrect lyrics, in The Journal of the Irish Folk Song Society 1967. The air was reconnected to its original lyrics by singer Pádraigín Ní Uallacháin in 2003 and recorded on An Dealg Óir CD (Gael Linn).

It is one of a number of songs in the Oriel tradition written for harp accompaniment.

The air was collected by Edward Bunting in 1792 and published in 1809. Although it is arranged for piano, it is the version that most closely fits the metre of the lyrics and the one sourced for matching to the metrics and lyrics of the song-poem. 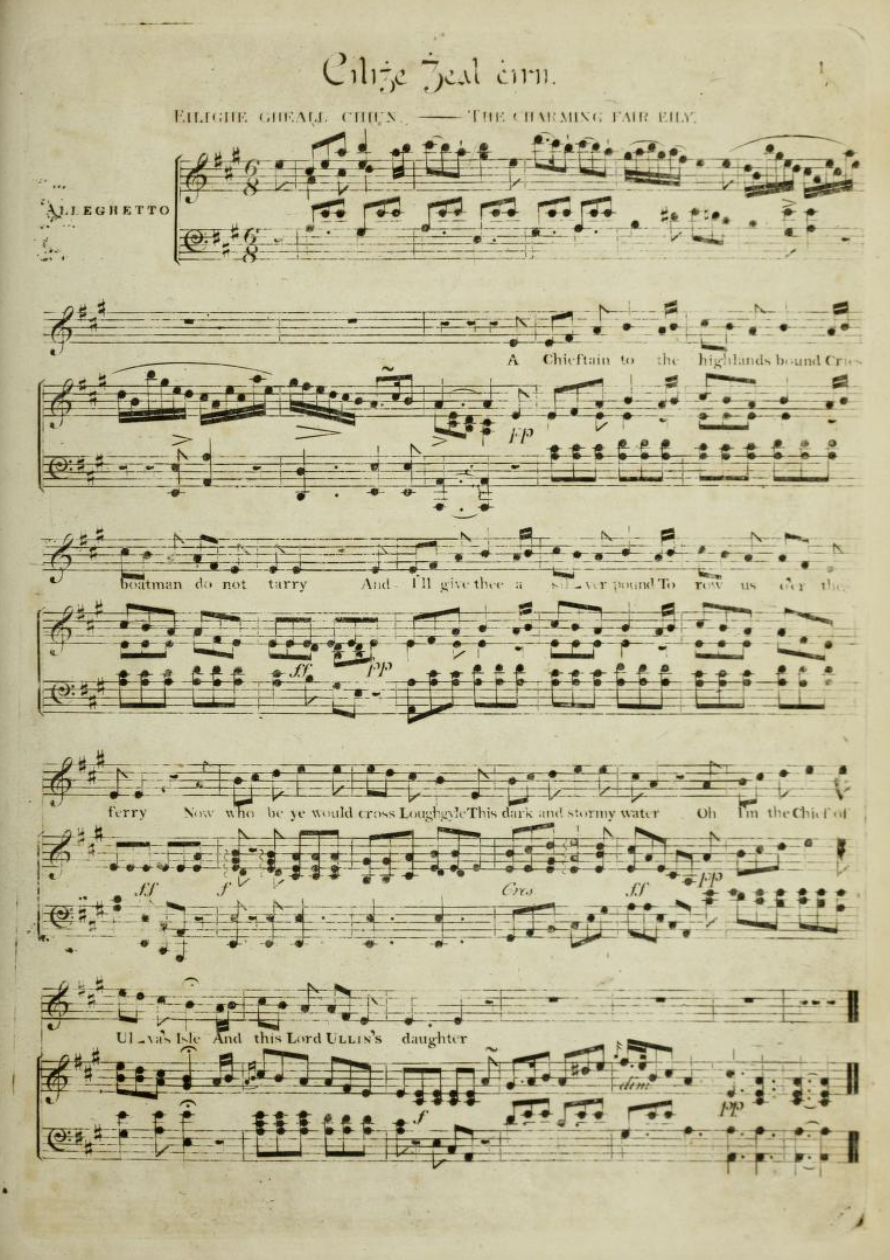