‘He was unrivalled in poetry and music, on which account he was commonly called Pádraig na cclairseach i.e. Patrick of the Harps.’

Gaelic scholar’s agree that he was the father of Patrick Linden mentioned in harper Arthur O’Neill’s memoirs, although, by no means was he a young man when he fathered him. His daughter was Molaí Nic Giolla Fhiondáin who composed Coillte Glasa a’ Triúcha (The Green Woods of Trugh (AHU pp.224-7) which was played by Arthur O’Neill.

He was a poet and harper who was a friend of the Oriel poet Séamus Dall Mac Cuarta and also acquainted with another Oriel poet, Peadar Ó Doirnín whose song poems were written down by Edward Bunting.

Pádraig Mac Giolla Fhiondáin was born c.1666 in the Fews district of south Armagh. He is associated with the townland of Lisleitrim in Creggan, County Armagh, where there was a hill called Linden’s Hill. Luke Donnellan, the collector (AHU 361-3), was of the opinion that this was his native place. His mother was Siubhan Nic Ardail, who was a poet, historian and musician and who encouraged the young Mac Giolla Fhiondáin:

‘It is related that his mother took particular care to inspire (in) him … a taste for music and poetry.’ It appears that there was a long tradition inherited from his mother’s family. His mother Siubhán was ‘the great grand daughter of Torlough an Fhuinn, or the great composer of music … Patrick was then a musician and composer by blood.’   (AHU 343-4) 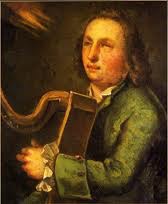 When the harper Carolan visited the area, Mac Giolla Fhiondáin met with him and the poet Séamus Dall Mac Cuarta, at least before 1733, and wrote a poem commemorating his visit to County Louth:

From his own poetry we can glean that he was prosperous and had a substantial house. He was renowned for his hospitality and generosity, welcoming poets and musicians to his home. His house was the ‘well known asylum of the bards and seminary for such as thirsted for learning or knowledge. The bards and musicians with other learned persons held stated meetings or conferences in his house on imitation of the ancient bards of Ireland.’ (AHU p. 344)

Mac Giolla Fhiondáin was credited with encouraging other poets, which partly accounted for the richness of the poetic tradition in the south Ulster district:

[…] it was he (Linden) that kept alive the lingering spirit of poetry and music, and it was owing to his example that the Fews, Down and Louth produced so large a number of truly learned bards and musicians at this and at subsequent period … Frequent iomarbháigh or bardic contentions were held in his house and under his inspection. Owing to the rigour of the penal laws, several bards could not commit their compositions to writing, but the learned and patriotic Linden corrected where necessary and copied them; hence he was usually called Reacadóir na mBard (A Repetitor of Poets).
(AHU p.344)

He reputedly held a school of poetry and harp playing at Cnoc Chéin mhic Cháinte (Killen Hill) outside Dundalk where as many as eighteen poets and literary people would assemble there.

He was also renowned as a composer and harper: ‘he was one of the most learned men of his day and an eminent poet composer and musician. Patraicc na Clarsighe Mac a’ Lionndoin (Patrick of the harp MacAlindon) was the usual name his countrymen gave him on account of the superiority of his performance on that instrument.’

And from another source: ‘he was unrivalled in poetry and music, on which account he was commonly called Phadrig na cclairseach i.e. Patrick of the Harps.’ (AHU p. 345)

The airs to Séamus Dall Mac Cuarta’s poems are attributed to Mac Giolla Fhiondáin the harper: ‘It was he who transcribed and set to music all Courtenay’s works.’ This points to Mac Giolla Fhiondáin as the possible composer of the original versions of the airs of Ailí Gheal Chiúin Ní Chearbhaill and Caoin Róis included in this collection (AHU pp. 217-23).

Mac Giolla Fhiondáin did indeed write Mac Cuarta’s grave-lay. As he was a musician, it is probable that the death-lay would have been sung or chanted by him while playing the harp, echoing the older bardic tradition where:

‘the body of the deceased dressed in grave clothes, ornamented with ﬂowers was placed on a bier or some elevated spot. The relations and keeners ranged themselves in two divisions one at the head and the other at the feet of the corpse. The bards and coteries had before prepared the funeral caoinan. The chief bard of the head chorus began by singing the ﬁrst stanza in a low doleful tone, which was softly accompanied by the harp.’
(AHU p. 345)

Mac Giolla Fhiondáin’s surviving poems mainly consist of laments, poems of praise, satires and contentions with other local poets and some love songs. He was described as ‘a sweet lyric poet whose productions display considerable genius’; however, his love songs are formal, lacking in feeling and passion and not typical of the mainstream love songs of the people. This would suggest that they were written for the purpose of singing to harp accompaniment at formal occasions. To date none of his airs have been identified other than being the composer of ‘all Courteney‘s songs’ i.e. Ailí Gheal Chiúin Ní Chearbhaill and Caoin Róis  (AHU pp. 217-9) among others.

He had songs written in his praise during his lifetime: ‘the following ode was written by the learned Patrick O’Pronty on Patrick Lindon as an eulogy on that great man’s skill at one of the meetings of bards held at Lindon’s house. Lindon played it on the harp and Ó Doirnín sung it’. (AHU p. 346)

He died, according to Fergus McVeigh who composed his death-lay, in March 1733, one month after his poet-friend Séamus Dall Mac Cuarta, for whom he had written a death elegy.

Mac Giolla Fhiondáin is buried in Creggan graveyard, near Crossmaglen in County Armagh. His burial site is unknown, but a plaque on one of the cemetery walls was placed there in his memory.